VISCOFAN ON THE STOCK MARKET

2017 is characterized by an acceleration in world growth after two consecutive years of slowdown. According to estimates by the International Monetary Fund (IMF), global GDP will grow at +3.6% in 2017, up from +3.2% in 2016 and +3.4% in 2015. A better economic environment supported, among other things, by a more favourable world financial situation, greater business and consumer confidence, signs of improvement in emerging raw material exporters, and the revival of world investment by stimulating manufacturing activity.

Thanks to this economic recovery, an environment of less geopolitical uncertainty, and the approval of tax reform in the United States at the end of the year, some equity indices have reached historic highs.

Viscofan shares are listed on the Spanish stock markets of Madrid, Barcelona and Bilbao. In addition, the shares have been trading on the continuous market since its flotation in December 1986, belong to the Ibex 35 index, the Madrid Stock Exchange General Index (IGBM) and form part of the Consumer Goods segment of the food subsector, as well as the Euro Stoxx Food & Beverage index and the Eurostoxx 600 index.

During the year, overall over 38.7 million Viscofan shares were traded, with a trading volume of €1,995 million, which is equivalent to a daily average of €7.8 million.

Throughout the different strategic plans, the Viscofan Group has built a sound and flexible business model. This characteristic entails the creation of cash flows that allow investment projects to be carried out in order to improve value creation, which is shared with shareholders in cash and at the same time maintaining a sound balance sheet structure.

In this respect, the stock market continues to recognise the Viscofan Group’s value creation, and is combined with the Group’s commitment to shareholder remuneration. Thus, in the last ten years the average annual return has been 14%, and 16% taking into account shareholder remuneration. Analysing the creation of value over time, this is greater for shareholders who have held shares in Viscofan for a longer period of time. For example:

The Viscofan Group is immersed in the strategic period known as MORE TO BE, which covers the period between 2016 and 2020, looking ahead in its value creation proposal that entails the objective of leading the main casings markets in service, technology and cost. An ambitious and investment-intensive target, with €193.9 million earmarked for investments in 2016 and 2017 and without requiring additional efforts from shareholders while maintaining a sound balance sheet.

In addition, the financial and operational strength of the company allows for a further increase in shareholder remuneration. Thus, the remuneration proposed by the Board of Directors for 2017 amounts to €1.55 per share, 6.9% higher than that distributed in 2016 and represents a total distribution of €72.2 million, equivalent to 59.2% of the total net profit attributed to the Viscofan Group.

In terms of profitability, the total dividend proposed for 2017 is 3.0% of the average share price during the year.

VISCOFAN, ITS SHAREHOLDERS AND INVESTORS

One of Viscofan’s objectives, through its Department of Investor and Shareholder Relations, is to create value for the investor community by improving accessibility, the transparency of information and providing shareholders with relevant information in order to gain a better understanding of the company itself and its results, strategy and operations. 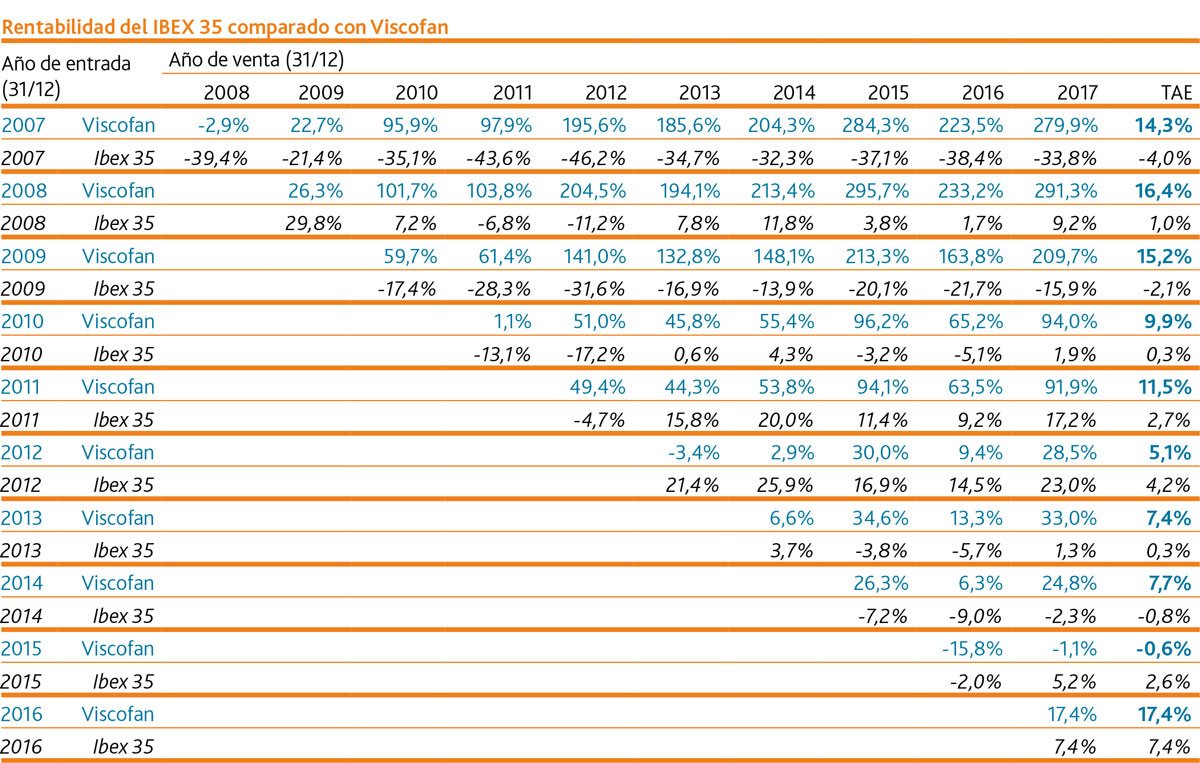 Viscofan provides the investment community with a multitude of communication channels: presentations at seminars and events organised by the financial community, road shows with institutional investors, whether they are promoted by the company or by brokers, results presentations, the General Meeting of Shareholders, organised visits to Viscofan’s head office, telephone calls to a dedicated investor and shareholder helpline, a special e-mail address, the notifications and regular public information submitted to the CNMV (Spanish National Securities Market Commission), as well as the information published on the website www.viscofan.com, especially in the Investor Relations section in which Viscofan makes the latest news, relevant facts, reports and quarterly presentations of results, annual report, share price performance, etc. available to the public.

The communication effort carried out throughout all these years has been recognised by the investment community. Institutional Investor in its “All European Executive Team” awarded Viscofan in 2016 the 1st CEO for Sell-Side and 2nd Best CEO combined, and 3rd IR for Sell-Side of the Paper & Packaging sector. Also in previous years, in 2015 the 2nd Best IR for Sell-Side and

in 2012 the 1st Best IR professional for the Sell-Side in the packaging and food sector.

Bidirectional communication is important, since the questions and concerns of the Financial Community are taken into account and transmitted within the company, making it possible to have a better overall view of it. In 2017, the most frequently asked questions related to the development of the MORE TO BE strategic plan, shareholder remuneration, the recovery of the Brazilian casings market, the impact of exchange rate fluctuations, investments projects, especially in fibrous and plastic technologies, and Vector’s and Supralon’s acquisitions.

Viscofan maintains fluid communication with the financial markets, so that in 2017 a total of 19 analysis companies, Spanish and international alike, covered Viscofan on a recurring basis. In this respect, more than 125 analyst reports were published in 2017 on Viscofan. 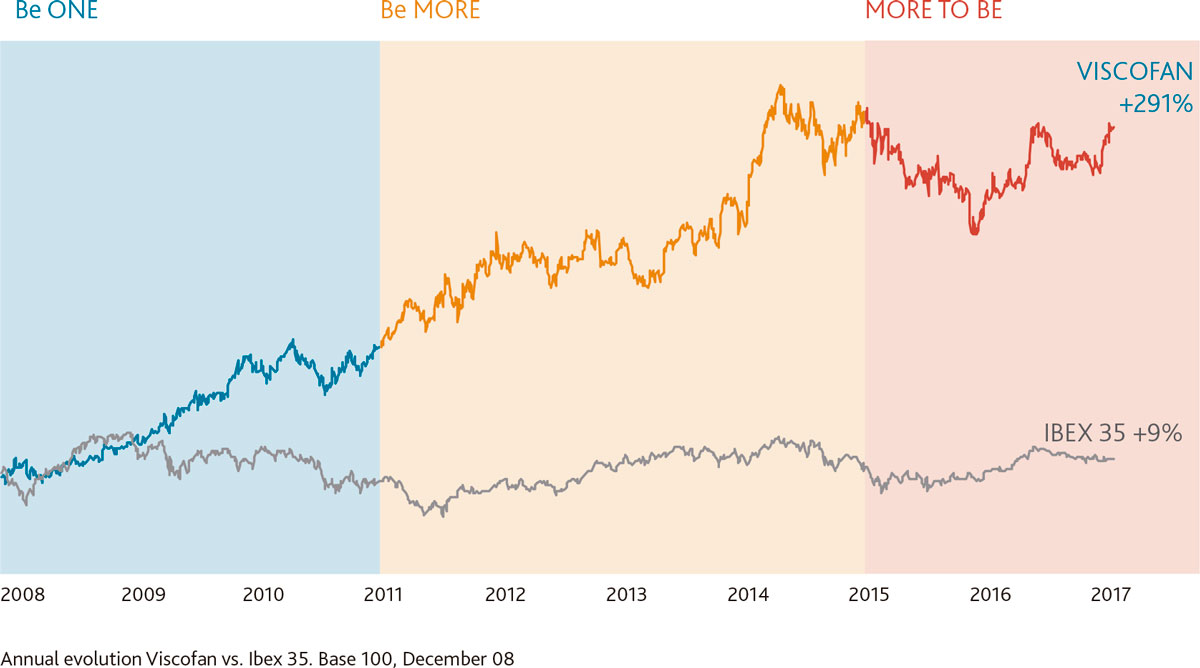 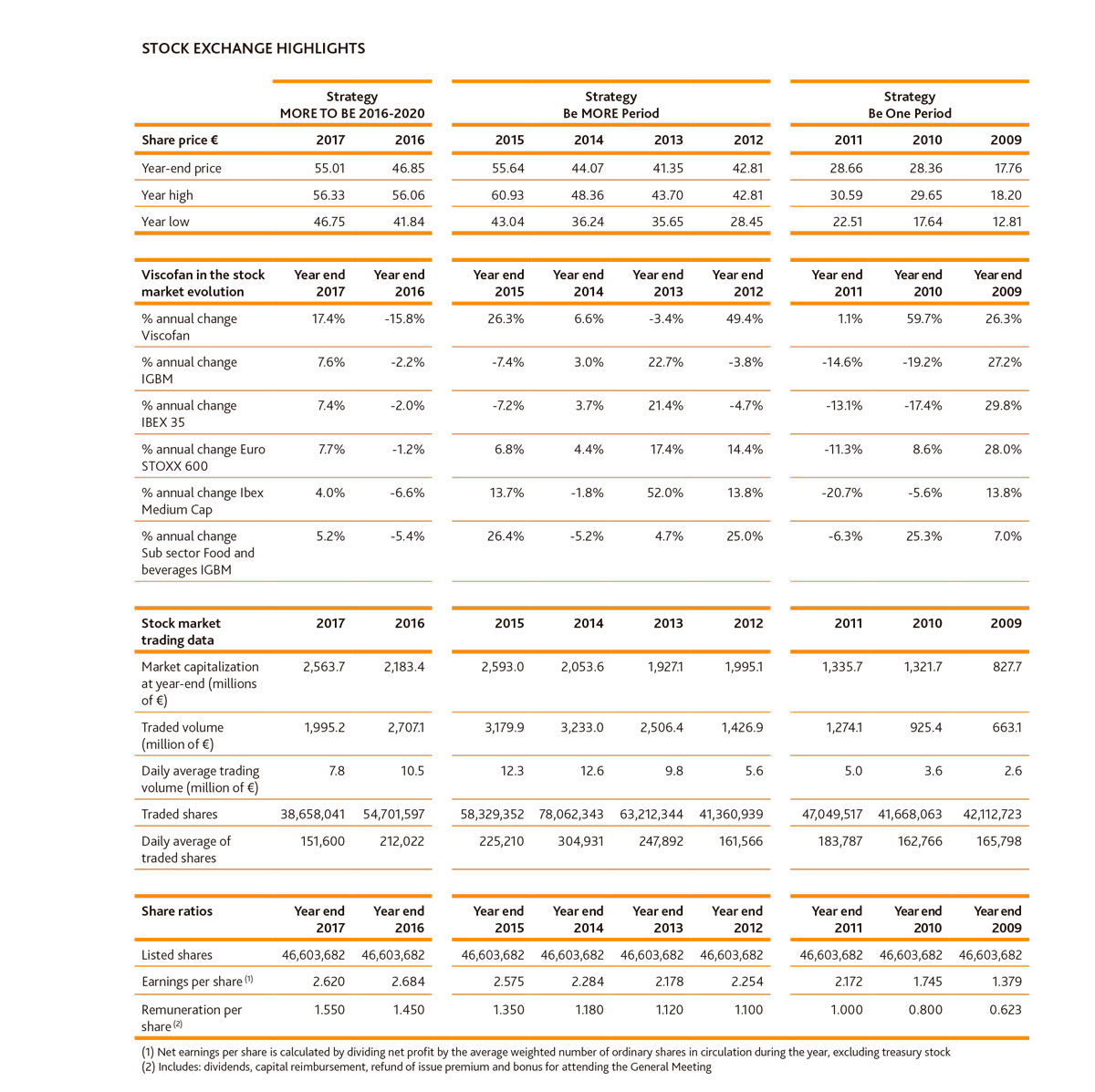 Our relationship with the community Subsequent events