1. Introduction to the casings market

Casings are soft, cylindrical containers used to keep mixture of stuffed meat, either fresh or processed. Casings can be animal gut or customized.

The Viscofan Group is the world leader in customized casings for the meat sector, also known as artificial casings because traditionally these products have replaced animal gut (mainly bladders and intestines) used by meat processors to stuff the meat.

Men have stuffed meat in animal gut from ancient times, but customized casings originated at the beginning of the 20th century when, due to the difficulties faced in obtaining animal gut, volatility in prices and problems of the cold meat production industry, other alternatives emerged in different countries based on different materials that could be used for sausage and cold meat production as an alternative to animal gut. This change involves a qualitative leap for meat processors, achieving better quality, productivity and food safety standards.

Nowadays meat producers have a wide range of technological alternatives in the production of cold meat, according to production and product specifications, combining a better range of casings with substantial production savings.

The casings market has an estimated value of €4,400 million. Meat processors get to decide whether to use animal gut (approximately half of the market) or customized casings made up of different materials, according to production and product specifications, combining a better range of casings with substantial production savings. As a result, the higher production requirements and meat processors’ sophistication, the greater the tendency toward customized casings rather than animal gut.

Approximately 11-12% of the total casings market. Cellulose casings are made from natural cellulose. They are used primarily in the manufacture of industrially cooked sausages (frankfurters, Vienna sausages, hot-dogs, etc.).

The casing is generally used only as a cooking mould, and the manufacturer peels it off before sale to the end-consumer.

Using a complex manufacturing process, the cellulose molecules are chemically and mechanically depolymerised and subsequently repolymerised in either cylindrical or tubular form, according to the customer’s requirements.

Account for around 5% of the total casings market. They are cellulose casings reinforced with manila hemp, which makes for high strength and highly uniform calibre. Fibrous casings are primarily used for large caliber sausages and slicing meats such as mortadella, ham, pepperoni, etc.

Approximately 24-25% of the casings market is represented by casings that use collagen as their raw material. Collagen is obtained from cow and pork hides and processed using sophisticated technology so that it can be shaped into casings.

Collagen casings are of two kinds: small calibre (e.g. fresh sausages, bratwurst etc.) and large calibre (e.g. salami, bierwurst etc.). The key difference between both collagen casings lies in the thickness of the casing wall and the way the collagen is processed to withstand a given degree of stress when filled and holding in the weight of the meat.

Approximately 11-12% of the market. Plastic casings are made from a range of plastic polymers providing barrier properties, mechanical strength, thermal shrinkage, and heat resistance, depending on the application requirements of the product.

2. Analysis on the growth factors within the casings sector

Throughout history this market has proven to be correlated with population and its growth, the evolution of food consumption habits and the sophistication of meat processors, who may decide to use animal gut or customized casings in their production process. These factors are behind a growth of between 2% and 5%, which is the historic average of the casings market.

In 2017 casings market has once again delivered an average historic growth rhythm thanks to the rebound in volumes in Latin America and the robustness of the Asian and European market, in contrast against the weakened US market.

The above market context suffered a highly volatile currency environment, especially in the second half, driven by the depreciation of the US dollar against the euro.

Evolution of the population

The world grows in terms of population at a yearly average rate of 1% according to FAO, which expects it to reach 7,700 million people by 2020, 300 million more than now.

The bigger demographic mass is led by these emerging markets, which steadily grow in importance with regard to the total. In 2017 more than 83% of the population concentrated in these areas.

Population grows in terms of wealth. In this sense, the IMF estimates an annual GDP per capita growth of 4% up to 2020, for an unequal world, with emerging areas below US$ 10 thousand, which set the world average per capita GDP in 2017.

In today’s world the greater need and demand of meat is an undeniable fact. According to FAO growth perspectives for the meat market remain solid. In global terms, world meat demand is estimated to rise at a sustained annual pace of 2%.

BY REGION, IN EUROPE AND USA, THE LARGEST MEAT PRODUCERS IN THE 20TH CENTURY, GROWTH IN CONSUMPTION IS NOW MODERATE. HOWEVER, EMERGING AREAS ARE LEADING GLOBAL GROWTH.

This growth is due to globalisation of eating habits, an increase in the purchasing power of middle classes and population growth in cities, driven also by rural to urban migration. In this sense, approximately 54% of population is concentrated currently in urban centres, a figure which is expected to rise up to 56% in 2020, according to FAO estimates.

During recent years, customer demands have evolved significantly. Access to information and diversity of the supply has allowed consumers to enjoy more alternatives when acquiring cold meats and, therefore, also to demand more quality, for example as to food safety and convenience.

But, in turn, meat processors need greater flexibility and customisation to adjust to new preferences and to the dynamism of the environment, which includes volatility of costs of production input, increases in labour costs, requirements on the quality/price bundle imposed by supply chains, regulatory development, globalisation and the size of meat processing companies, which makes faster production increasingly important, with stability in quality parameters, seeking greater automation and lower production waste.

In this sense, the development of customized casings has proven to be a powerful ally in competitiveness, especially in the regions of Europe and North America, where the use of casings is most common, with per capita consumption of €1 per person per year, as against €0.5 of Latam and €0.1 in Asia.

3. Position of Viscofan in the casings market

In 2017 the Viscofan Group continued to reinforce its leadership position by revenue while improving its value proposal and position in the market. The wide geographical, technological and product range have permitted this performance, which means to be “The Casing Company”, the world casings leader, with an estimated market share above 16% and around 32% in the customized casings segment.

Viscofan has the largest production and commercial presence of the market. Headquartered in Navarre (Spain) and with 17 manufacturing plants across Spain, Germany, Belgium, Czech Republic, Serbia, United States, Mexico, Brazil, Uruguay and China.

Technology diversity makes it possible to offer the market a global solution, being the only one in the sector with proprietary technology in the main available technologies: cellulose, fibrous, plastic and collagen.

This technology diversity makes it possible for the Viscofan Group to offer an extensive product portfolio, adapted to the different needs of customers, and helping them, in turn, to develop their product range of our customers. In this sense, in 2017 almost 55% of casings sales came from customers who buy products from the four main technologies. 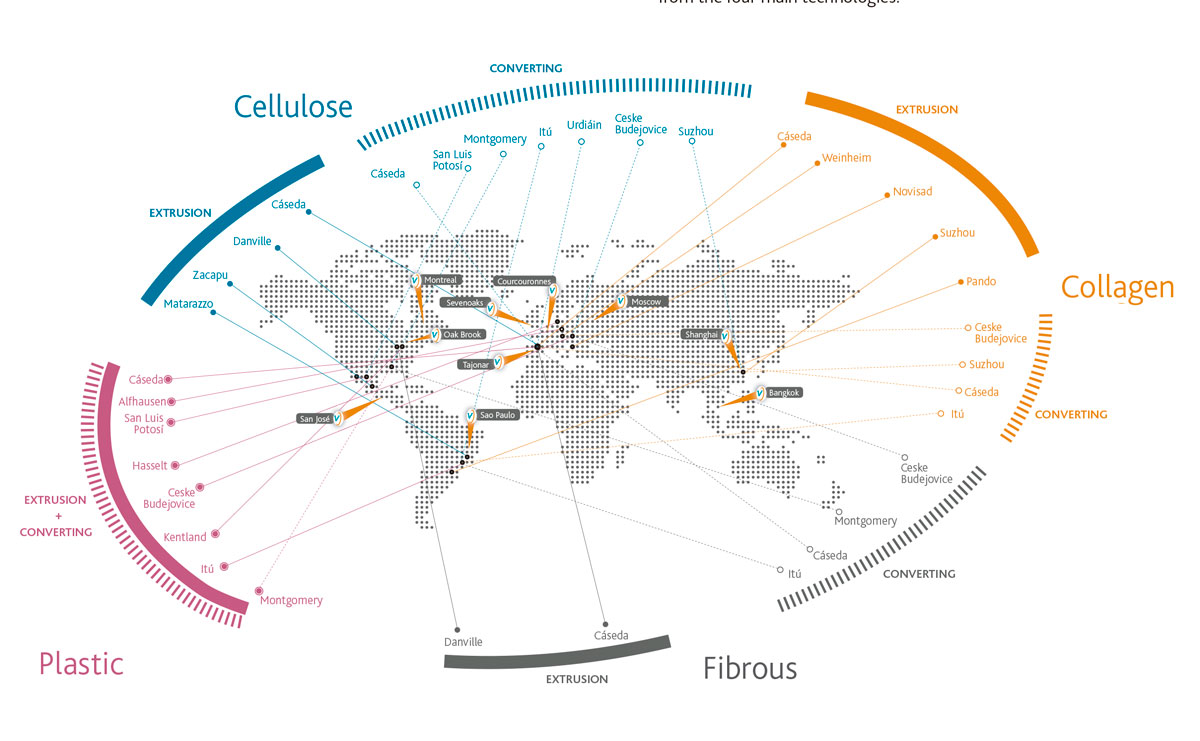 Mission, vision and values More to be strategy