MAIN HIGHLIGHTS OF THE JANUARY-DECEMBER 2017 RESULTS

In 2017 the casings market posted robust growth in volumes, driven by the emerging regions, highlighting the recovery of the Brazilian market.

Against this backdrop, Viscofan has strengthened its leadership position with volume growth across all casing families: cellulose, collagen, fibrous and plastic casings. This performance was largely underpinned by the emerging countries of Latin America, Asia and Eastern Europe, which contrasts with the more modest showing of the developed markets, chiefly in North America, owing to the decline in cellulose casing volumes in the USA.

IN 2017, THE VISCOFAN GROUP CARRIED OUT A LARGE NUMBER OF PROJECTS UNDER THE MORE TO BE 2020 STRATEGIC PLAN, THE AIM OF WHICH IS TO SPEARHEAD THE MAIN CASINGS MARKETS STRENGTHENING SERVICE, COST AND TECHNOLOGY STRATEGIC AXIS. AS A RESULT OF THIS STRATEGIC DRIVE, THE VOLUME OF INVESTMENT HIT A NEW RECORD HIGH OF €107.2 MILLION IN 2017.

Particularly noteworthy were the outlay on the construction of the new plant in Cáseda (Spain), which entailed total investment of €56 million, of which €44 million was invested in 2017, and start-up costs of around €2 million to commence trial production in December 2017. This plant features state-of-the-art technology for the production of viscose-based casings, which means customers will benefit from a marked improvement in terms of quantity and quality thanks to product improvements and production efficiency gains. Investment also included €6 million in the installation of the best environmental solutions in the market.

Investments 2017
€0,0
million
The plant features machinery with new fibrous technology which has already been approved by customers at the start of 2018. We expect fibrous casing customers to experience improved service levels once the Viscofan Group is able to offer a better response to the market thanks to the production of these casings in the two main markets: Europe and North America.

Furthermore, the plant has been designed to accommodate new leading-edge cellulose casing capacity from 2018 in keeping with Viscofan’s planned growth strategy for this technology.

At the same time, the Viscofan Group is continuing to progress in plastics technology by carrying out significant operational and commercial investment. In November 2017 the Viscofan Group acquired the Supralon companies in Europe, which dovetail with the activities of the Vector companies in the USA and Europe bought in October 2016. With these acquisitions, the Viscofan Group moves a step closer to achieving leadership of the global plastic casings market in terms of revenues, in line with the goals of the MORE TO BE strategic plan. 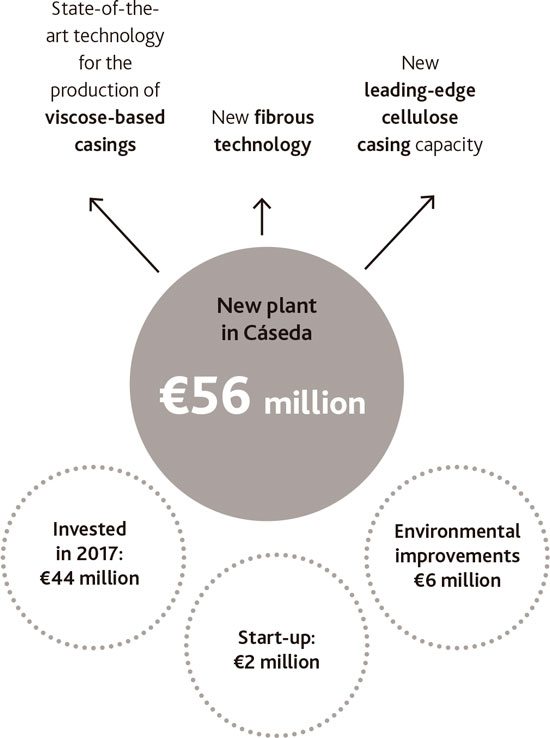 In 2017 efficiency gains and production cost savings were achieved at plants in a year marked by hefty investment, which in the short term entails a recruitment drive, commissioning costs associated with the start-up of new operations and higher amortisation and depreciation expenses owing to the larger industrial equipment base.

This backdrop of organic growth and strong investment activity coincided with a highly volatile exchange rate environment, with the euro making strong gains towards the end of the year against the main currencies, in particular vis-a-vis the US$, the BRL and the CNY. This fluctuation caused a significant slowdown in results in the fourth quarter.

Although exchange rates were significantly below those forecast in initial guidance, the results achieved by the Viscofan Group are in line with the objectives set at the start of the year in terms of revenue and EBITDA, while net profit was a little lower due to negative exchange differences.

Net bank debt at the end of 2017 stood at €41.1 million, 0.2 times EBITDA, with robust cash generation which enables the Group to marry the high level of investment in our plants to improve capacity and deliver operational improvements, to take advantage of sector consolidation opportunities such as the acquisition of Supralon and the continued improvement of shareholder remuneration by paying a final dividend of €0.92 per share, for a total of €1.55 per share. This means remuneration is 6.9% higher than in 2016.

Letter from the chairman Changes in the scope of consolidation