In 2017, Viscofan posted volume growth across all casing families, with this growth accelerating in the final quarter. This growth is being driven by the strong performances in Latin America, Europe and Asia. In North America, conversely, the decline in sales in the United States and the weakness of the dollar continue to take a toll.

The breakdown and geographical performance (2)  of revenue in 2017 is as follows:

In 2017 the Viscofan Group combined efficiency gains in several factories with intense investment activity, standing out the new plant in Cáseda (Spain), which commenced trial production in December 2017, entailing start-up costs of around €2 million.

Against this backdrop, the performance of the main operating expenses was as follows:

Personnel expenses grew by 9.3% in 2017 compared with 2016 to €184.3 million owing to the inclusion of the workforce of Vector in the United States and Europe and the increase in personnel recruited, most notably in Spain. The average headcount in December 2017 was 4,554 employees, up 4.4% compared with the average in 2016.

Cumulative depreciation costs in 2017 grew by 13.4% vs. 2016 to €56.4 million, chiefly due to the larger tangible asset base following the investment carried out under the current MORE TO BE strategic plan.

The difference between the theoretical tax rate for 2017 (28%) and the effective tax rate (16.1%) is basically due to the different taxes paid by non-resident subsidiaries in Navarre (Viscofan S.A. tax domicile) which pay tax in all countries in which they operate, applying the corporate (or similar) tax rate in force on profits for the period and tax allowances for investments by various Group subsidiaries.

2017 saw a high level of investment as a result of the multiple projects carried out under the MORE TO BE strategic plan. The most notable is the new plant in Cáseda (Spain), which means that since the end of 2017 the Viscofan Group has boasted the most cuttingedge viscose-based casing facility. Machinery for the production of fibrous casings has already been installed in Europe and initial testing is being carried out at the start of 2018 with very positive results.

In 2017 new collagen capacity was also installed and started up in China and Serbia.

Overall, the Viscofan Group invested €107.2 million in 2017. The favourable market conditions and the good results achieved in testing the new installations support the MORE TO BE strategy in continuing investments to strengthen the competitive position of the Viscofan Group.

The breakdown by type of investment in 2017 is as follows: 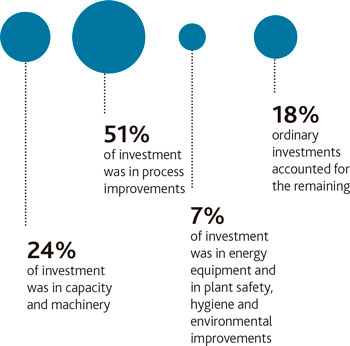 The Board of Directors of the Viscofan Group has agreed to propose to the General Shareholders’ Meeting the distribution of a final dividend of 0.92€ per share, with an amount of €42.9 million to be paid out on 7 June 2018.

This means total shareholder remuneration amounts to €1.55 per share, consisting of:

The remuneration proposed is 6.9% higher than the total remuneration of €1.45 per share approved last year, implying distribution of a total of €72.2 million, equivalent to 59% of the total Net profit attributed to the Viscofan Group.

At December 31, 2017 the Company owned no treasury shares.

The increase in shareholder remuneration, the stepping-up of the pace of investment projects, and the acquisition of Supralon companies in Europe by €12.0 million, of which €10.5 million have been paid out in cash in 2017, having agreed a deferred payment for the outstanding amount, were largely financed by cash flows from transactions, leaving Net bank debt in December 2017 at €41.1 million compared with €8.8 million at the end of December 2016.

Based on estimated growth, the Group plans to invest to strengthen its leadership position in the casings market and to continue improving the service it provides, as well as to upgrade its existing industrial equipment and operations. Commitments include new capacity, technological upgrades, process optimisations and environmental, health and safety investments. Accordingly, investment commitments at the end of 2017 amounted to €7.0 million (€7,5 millones al cierre del ejercicio 2016).

At 31 December 2017, the Group had buildings and other assets obtained under financial leases whose minimum payments and present value amounted to €0.2 million (€0,4 millones a 31 de diciembre de 2016).

The Group also has various properties and other items of tangible assets under lease arrangements. Future minimum payments for these contracts at 31 December 2017 amounted to €7.6 million (€7,9 millones a 31 de diciembre de 2016).

The first few months of 2018 confirm the trend of growth in market volumes amid increased pressure on production input costs and greater currency weakness. In this environment, the Viscofan Group is continuing to invest in the improvement of its production plants in line with the MORE TO BE strategic plan, with the aims of reducing its cost structure and continuing to improve service and technological development levels. Against this backdrop, the Viscofan Group forecasts growth in revenue of between 4% and 6%, growth in EBITDA of between 2% and 5%, and 2% to 5% in Net Profit, underpinned by investment of €75 million (down -30% vs. 2016). The baseline hypothesis for these objectives involves an average exchange rate scenario of 1.25US$/€

The breakdown of non-recurring impacts booked in 2017 and 2016 is as follows:

In 2017 it is related with the positive impact of €4.5 million from the net impact of compensation for the fire in Germany following the deduction of nonrecurring stock, clearance and cleaning costs; and the management costs associated with the acquisition of the Supralon companies in Europe, among others.

(1)  Like-for-like: In comparative terms, like-for-like growth excludes the impact of exchange rate variations, the effect of the change in the consolidation scope (Vector and Supralon) and the non-recurring results of the business.

(2) Revenue by origin of sale.

(3) Consumption costs = Consumables +/- Changes in inventory of finished goods and work in progress.

Changes in the scope of consolidation Basis of preparation